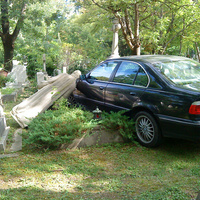 How to take holiday snaps

The Guardian had a nice essay by Stuart Jeffries on the emotional power of holiday snaps and followed it with some advice from Magnum photographer Martin Parr.

Most family photo albums are a form of propaganda, where the family looks perfect and everyone is smiling: we try to create fabrications about who we are. But if you’re doing a portrait of someone, ask them not to smile. You will get a much more dignified, interesting portrait, and it won’t look like a family snap.

Don’t be scared of photographing a storm-out, crying fit or strop. The instinct is to capture people only when they are smiling around a birthday cake or at a wedding, but never during an argument or funeral. On holiday, of course photograph the daytrips and good times, but make sure you document when everything isn’t going to plan as well.

You have to overcome the feeling that it isn’t the right time to take a photograph if you want to get away from this version of the perfect, harmonious family. I would argue that the more valuable document is the honest one.

One of the things that photographs are very good at doing is showing change. So take a picture before you go on holiday and when you have just got back. Similarly you should take before-and-after shots when you redecorate your bathroom, or if you replace your car.

When you are away, why not record all of the food that you eat? If someone has spent a lot of time cooking a meal, or if you’re going out for a treat, photograph the food. You could make a series of each breakfast, lunch and dinner that you ate. That would be fascinating.

Photograph the caravan, guest house, tent – wherever you are staying. Think of yourself as a documentary photographer; up the ante and take yourself more seriously.

Parr thinks that we should also print our pictures, and I suspect he’s right. “We are in danger”, he says,

of having a whole generation – and this will continue into the future – that has no family albums, because people just leave them on their computer, and then suddenly they will be deleted. You have to print them and put them in an album or a box, otherwise they could be lost. And write captions. You might think you are going to remember what is happening in a picture, but you probably won’t in 10 years’ time.